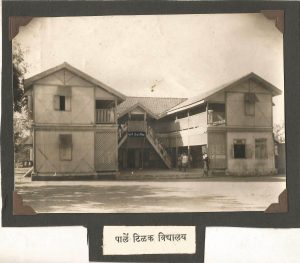 A value based premier educational Institution In Mumbai with focus on character building. A learned scholar, a great mathematician, philosopher, teacher and orator, Lokmanya Bal Gangadhar Tilak left for his heavenly abode on 1st August 1920.

The local stalwarts from Vile Parle contributed generously, despite difficult times to construct the school buildings. The Students strength increased and the management soon realized the need for facilities for higher education beyond school level. This led to the establishment of Parle College of Science and Arts in 1959.

The management soon felt that a Science and Arts College was not enough. In order to meet the growing demand for Commerce , the Parle College of Commerce was started in 1960 which was later named “M.L.Dahanukar College of Commerce”. The Parle Tilak Vidyalaya Association also made its presence felt in the central suburbs when it started ” Mulund College of Commerce ” in 1970. Also in 1970, in a nearby suburb Andheri . Parle TilakVidylaya Association opened another Marathi Medium school, named as ” Paranjape Vidyalaya ” both Primary and Secondary School . Very soon, that school also became a force to reckon with students featuring regularly in the merit lists.

In 2008 new I.C.S.E.School was started in the English Medidum School building Now the school has been relocated in a Separate Building . The first batch of 10th Passed in the year 2014-2015.

The Association also runs a Sports academy for the benefit of their students.currently it concentrates on Cricket and conducts coaching for School Children . As a result of professional coaching our schools have done very well in Haris and Guiles Shield tournaments.

At present Parle Tilak Vidyalaya Association under its umbrella is imparting quality education to nearly 26,000 students through different institutions from Primary to Post Graduate degree courses.

To Summarise the Trust is exclusively engaged in educational activities and is running the following schools and colleges.